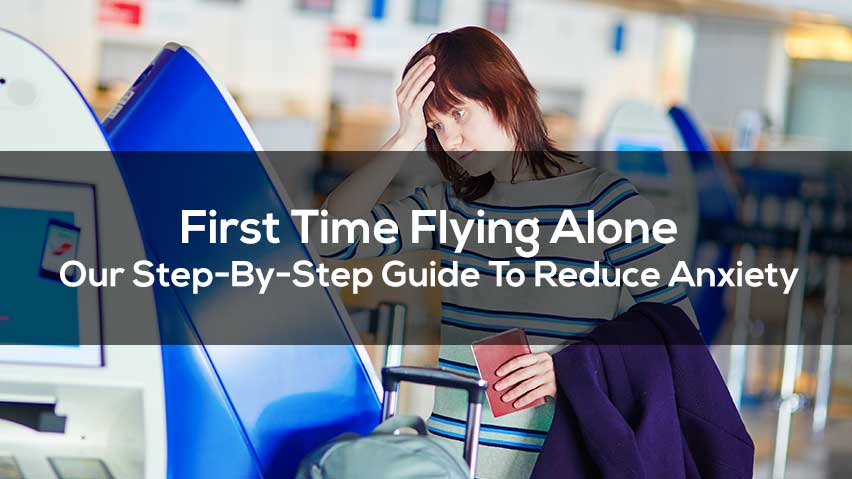 For many, it’s an even harder challenge. Many people are scared to travel and suffer from travel anxiety. My friend Lauren of Never Ending Footsteps suffered such bad panic attacks when she was younger that she barely left the house, developed an eating disorder, and never took public transportation.

Today, Lauren writes in-depth about her panic attacks and travel anxiety, how travel helped her cope with that, and what others can do to get over their fears and travel the world.

I was 16 when I had my first panic attack. I thought I was going to die. I was drenched in sweat within seconds, I had pins and needles everywhere, my chest was tight, and my left arm was tingling in a way that convinced me I was having a heart attack.

These panic attacks would take hold of my life — I was having as many as ten a day. I developed an eating disorder and was unable to leave my house for months at a time.

I’m not alone — 18% of the population in the United States suffers from an anxiety disorder, with around a quarter of these cases classified as severe. Fewer than 40% of anxiety sufferers are receiving treatment for their disorder.

I didn’t seek out treatment either. Instead, I decided to travel, hoping that would make me the self-assured, confident person I longed to be and hoping that having a panic attack on a beach in Thailand had to be better than having one at home.

My family and friends disagreed and told me that traveling would be a huge mistake. They didn’t think I was strong enough to deal with unfamiliar situations and were convinced I would be home within a week. In a way, their belief that was too scared to travel and their lack of faith in me spurred me on. I wanted to prove that I wasn’t as weak and as they thought I was.

By the time I left, my travel anxiety had improved, but I was still suffering from panic attacks anywhere from once a month to several times a day. In the four years I’ve been on the road, though, I can count the number of attacks I’ve had on two hands. Despite what everyone told me, travel can actually help you overcome your anxiety.

But how do you actually work up the courage to leave? How do you deal with anxiety on the road? And how does traveling actually help reduce anxiety? How to stop being scared to travel?

Step #1: Dealing with anxiety before you travel

Here’s how to calm your mind, get over your anxiety, and get yourself out on the road:

Remind yourself why you want to travel – Whenever you think about canceling your trip, picture yourself in the place you most want to visit and tell yourself that you have to get there and see what it’s like.

Imagine yourself in that place, living the life you’ve dreamed, without any anxiety in sight. These positive affirmations will calm you down, and doing it repeatedly helps you grasp the idea that you can successfully travel the world.

Imagine your life a year from now – What will happen if you decide to cancel your trip? It’s likely that a year from now, you’ll find yourself thinking, Damn, I had the chance to travel and I didn’t take it. It was the fear of living with regrets that forced me to take a chance and leave.

Find a community – There are a dozen forums out there for anxiety sufferers — my favorite is No More Panic — where you can post whenever you’re struggling and receive help and support from community members, as well as calming tricks to talk yourself down. Integrate yourself into a community like this before you leave, so that if anxiety does hit you when you’re on the road, you won’t feel like you’re struggling on your own.

Meticulously plan out your first few days – Anxiety often stems from feeling like you’re not in control, so a way to negate this is to plan out every detail of your first day or two on the road. Some suggestions:

By focusing on each step at a time, you can feel like you’re in control, and you won’t fear the unexpected as much.